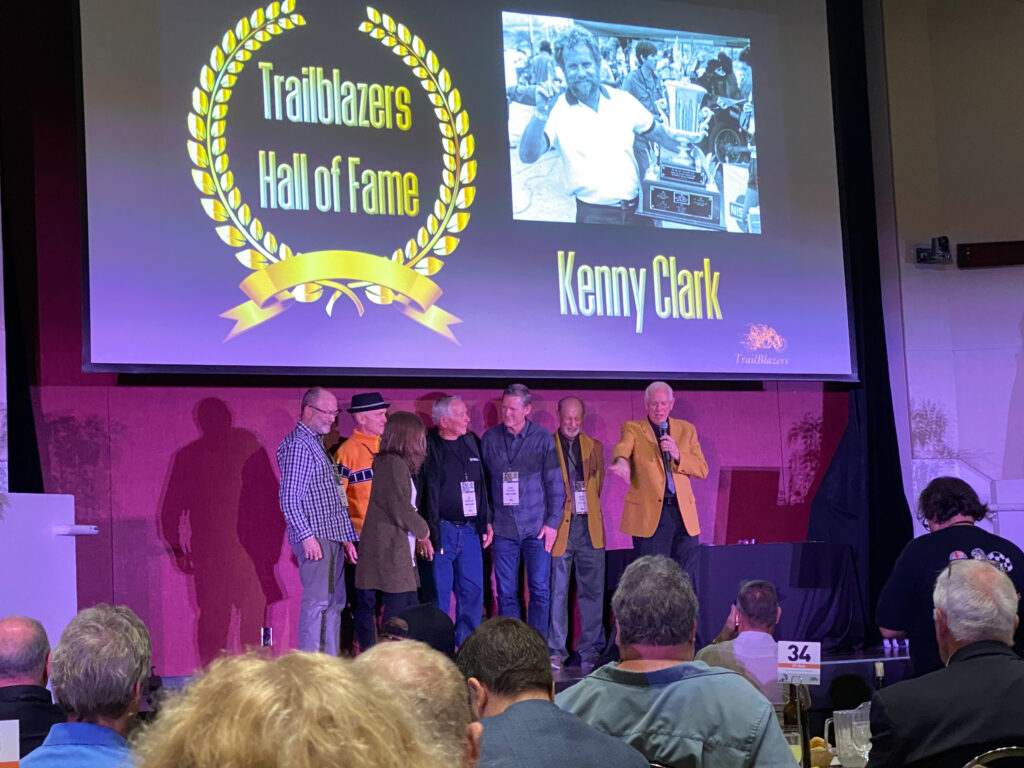 Have you noticed people acting a little stressed out lately? Our phones, TVs and computers spew out a continuous bombardment of horrifying news and a trip to the grocery store or gas station is all it takes to trigger stomach-turning despair. That’s why the 77th Annual Trailblazers Banquet couldn’t have come at a better time.

Attendees entering California’s Carson Center were treated to The Trailblazers Bike Show that included priceless (I say “priceless” because I don’t think many of the bike owners would sell them) and rare motorcycles that alone were worth the price of admission. But there was more.

The banquet kicked off with awards for the bike show and then the real reason everyone was there. The Trailblazers inducted six new members to their Hall of Fame, named the Earl & Lucile Flanders Lifetime Achievement Award and, the grand finale, bestowed the Dick Hammer Award.

Once the inductees and award winners had shared thanks, appreciation and insights to the gathering, it was impossible not to feel rejuvenated and blessed for being part of this extended motorcycling family. Everyone leaving the event did so cleansed of current-day anxiety and ready to hop on one of their motorcycles for a ride. At least, that’s how I’m feeling today.

Best in show: You’re looking at a 1966 Honda twin-cylinder 50cc (that means each piston is 25cc!) road racer that won the FIM World Championship in 1966. It is claimed to produce 14 horsepower at 22,500 rpm with a top speed of 115. This is a million-dollar motorcycle but it is unlikely the owner would part with it even for that amount. Triumphant history: This well-worn ’64 Triumph T-500 is claimed to have won at both the Hopetown and Elsinore GPs. The bike was “lost” for 40 years and restored by its current owner who races it 5 to 6 times a year. Too pretty to thrash: Some of the restored flat track bikes on display were too beautiful to imagine rolling out on a dirt oval. Preston Petty’s Suzuki: There were only 100 Suzuki RH67 twin-piped motocross bikes made. This one belonged to the late Preston Petty who modified the pipes to tuck in better than the stockers. Preston later worked with Suzuki on the development of the TM models (that followed the RH). Chris Carter of Motion Pro fame owns this treasure. A motley crew: Bumping into old (and meeting new) friends is a fringe benefit of attending the Trailblazers bash. From left are Suzuki’s Kevin Foley (thanks for a seat at the table), Jim “Bones” Bacon, Goat Breker, Jim Perry, Bryar Holcomb and yours truly, Jimmy McIlvain with my last name butchered on my name tag. Small but packed: The Trailblazers Bike Show had fewer entries than in past years but the lack of numbers was made up for in the quality. Look close. There are a lot of fast riders down there. Look sharp: It is great to see motocross legend Scott Burnworth at the Trailblazers Banquet every year. Scott shared stories about the late Kenny Clark during the induction ceremony.  Scott is proof that riding motorcycles keeps you young. Double the fun: Here’s something you don’t see everyday. Industry legend Ed Scheidler fabricated this one-off, twin-cylinder motocross bike when he worked at Yamaha. “It didn’t work,” say Ed today with a laugh. I don’t care. I would love to ride this bike even if it was only in a parking lot. I’ll bet it sounds awesome. President’s address: Don Emde, the Trailblazers’ president, did a great job of keeping things moving as emcee of the evening’s program. The only hiccup was when Darryl Bassani stole the microphone and went off on a weird tangent about Roger DeCoster during Selvaraj Narayana’s induction. Luckily, Don made like Chris Rock and got things back under control. Crowd appreciation: There was a lot of love flowing in the banquet hall. Every inductee got a standing ovation. By the way, this is only half the room. The sold-out event packed the Carson Center. Throttle or pedals: Sue Fish left her mark in both motorcycle and bicycle racing. She is still an active rider today and is a personal trainer. You can’t argue with the Trailblazers’ picks for their Hall of Fame. All the inductees were deserving. Person of the night: I got teary-eyed during the Dick Hammer Award presentation to Mert Lawwill. The young man on the far left lost both arms in an industrial accident. Mert fabricated mechanical arms so the young man could race his mountain bikes again! Mert never rested on his racing accomplishments. Check out Mert’s Hands Organization or donate here.